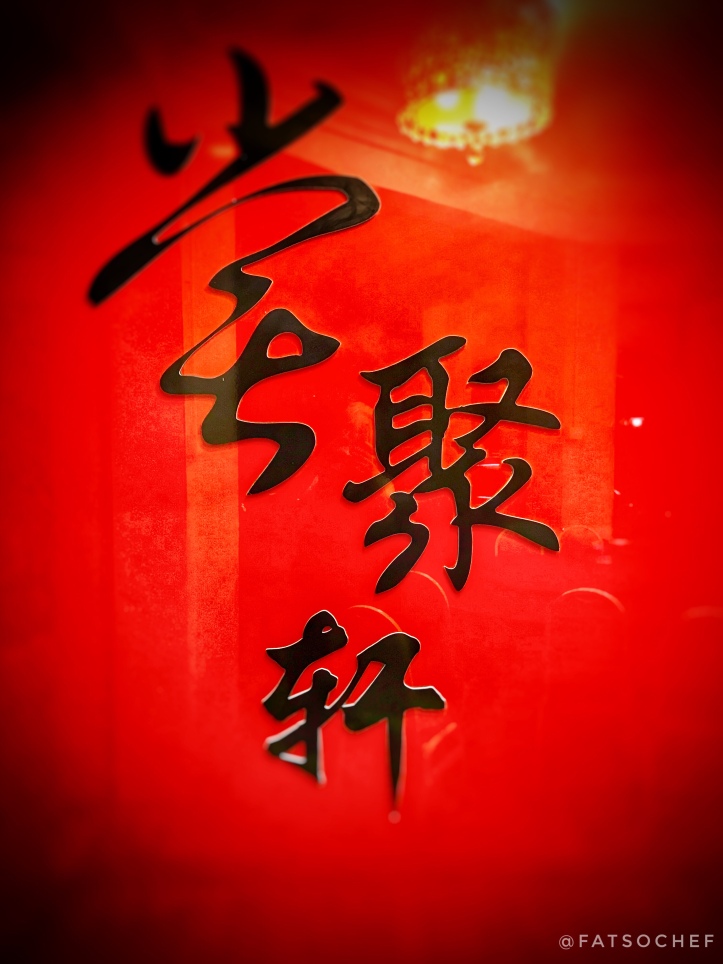 Sometimes, I am almost afraid to visit Kuala Lumpur for the simple fear of losing it and by that I mean over eating. Yes, that’s how much control I have over my gut! But here I am again! And why am I not surprised to find yet, another epic restaurant in this city of good eats! Mind you, it’s no fancy million dollar set-up! Instead we drove what seemed like a million miles to get to a typical upper class shop-house restaurant.. and by “upper class”, I mean, with air conditioning and table cloths! What matters is, we were all blown away from the first dish to the last. These are flavors that you don’t find just anywhere! Unique, robust, detailed and deep, layered flavors. Tasteful Cuisine (as tacky as it may sound) couldn’t have described their food any more accurate and better! 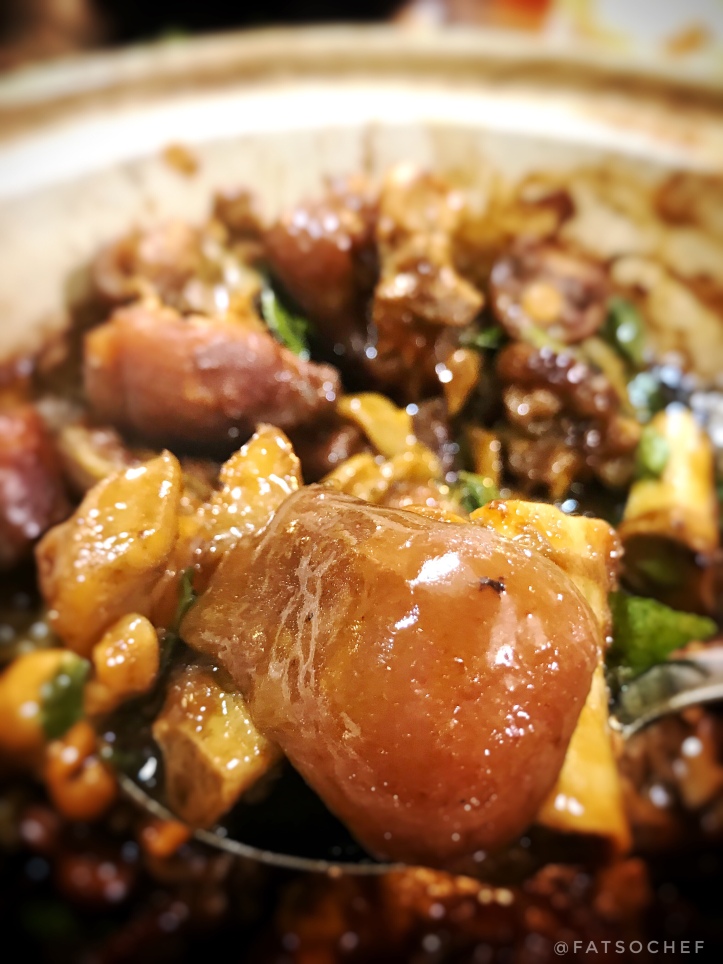 香爆海味猪手Pig Trotters.. I love a good pig’s trotter… Because I love that gelatinous skin that is gooey and gummy. There’s very little meat and if prepped correctly, barely any eeky oily aftertaste. At Tasteful Cuisine, the chopped up pig’s fore feet is fired up with an array of exquisite ingredients including sea cucumber, fish maw, pig’s tails and belly; I’m gonna guess, lots of garlic coupled with peppercorns and basil leaves among other premium sauces. Every ingredient from the trotters to the fish maw and sea cucumber was cooked on point, with a bite and texture that is PERFECT despite the fact that each ingredient requires different cooking times to achieve its individualistic quality. The rich flavor has whiffs of fragrant basil which gives the dish an extraordinary touch. You feel like there are 3 different dishes in that one pot because of the variety of textures. Simply amazing! This was my favorite of the night! Unbeatable! 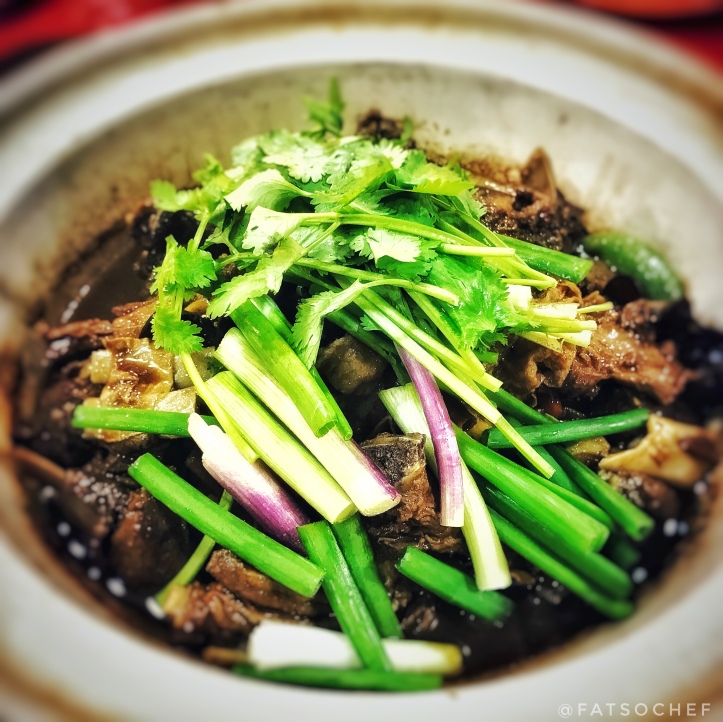 羊仔骨 Lamb Ribs .. The wine laced ribs were braised so tender and bursting with flavor. Probably not your cuppa tea if you’re sensitive to gamey meats. For me, that gameyness here was cleverly balanced by the use of cooking alcohol and herbs, while still allowing the natural taste and sweetness of the meat to shine. Served piping hot in a clay pot with lots of fresh scallions stirred through just before we dig in; gives the dish a touch of freshness when you take a bite! 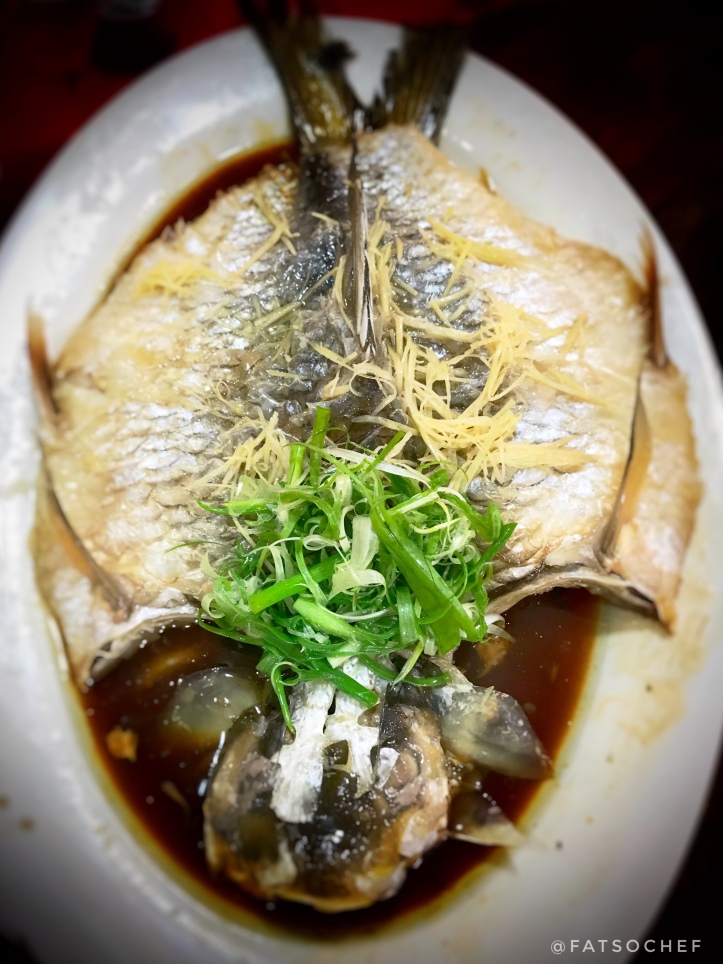 清蒸丁加兰 Steamed Fish .. Not for the non expert fish eater but if you’ve got the patience, this prickly local fresh water fish is one sweet baby. Steamed Hong Kong style, meaning with nothing but premium soy sauce, ginger and scallions, the fish was fresh and succulent. Naturally I would have preferred less bones in my fish. This one had some that were fine as needles! I had to be very cautious and slow taking this in. Sometimes you gotta work for your food… And if you’re conscientious, you shall be rewarded! 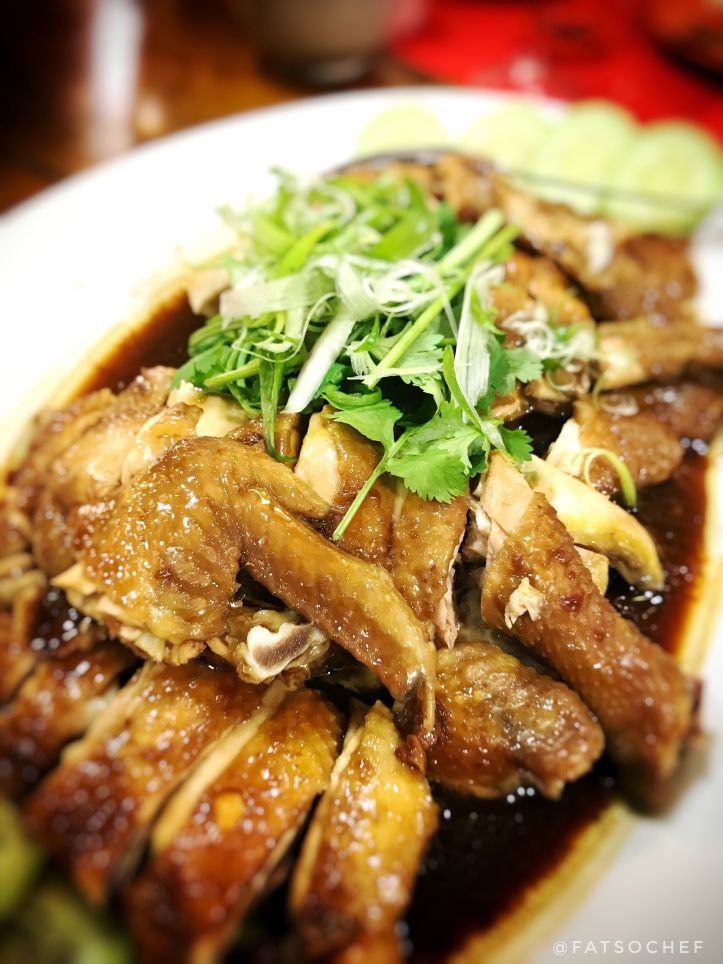 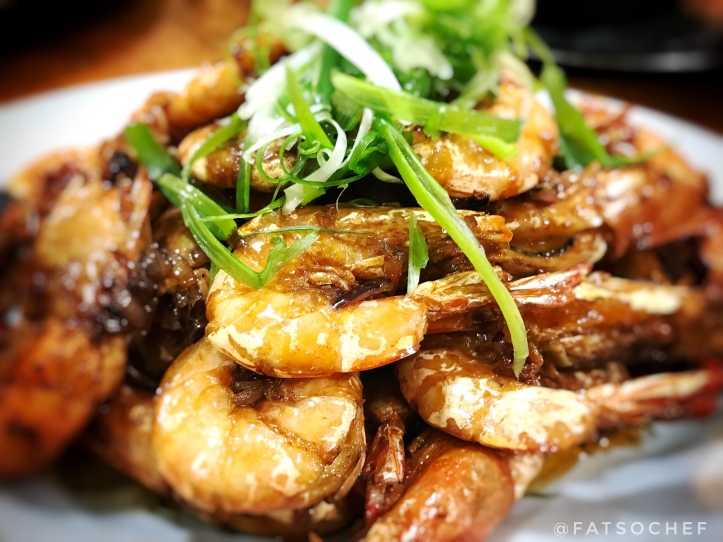 头抽焗明虾 Baked Tiger Prawns .. Baked to perfect doneness with a savory coating of sauce that’s finger licking good and shells so crisp you devour those too! 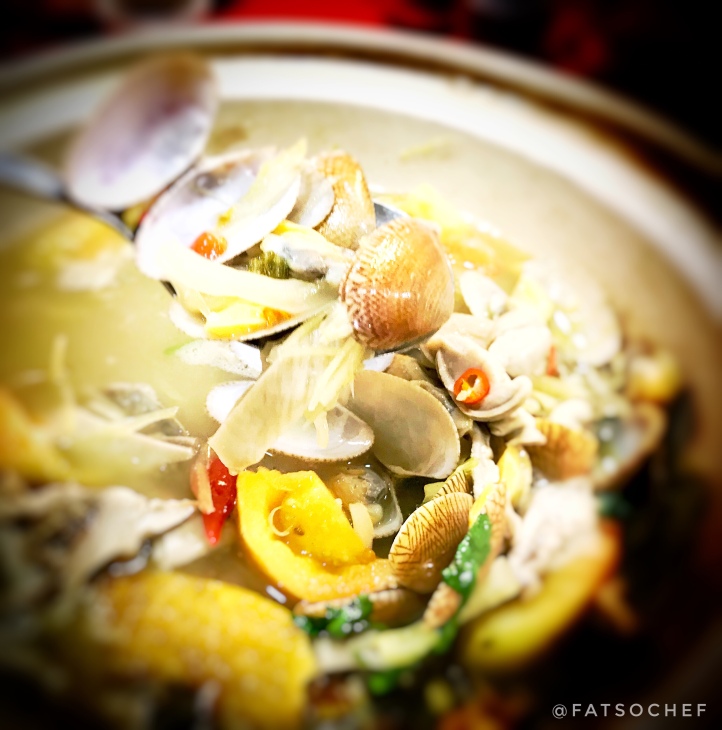 胡椒猪肚拉拉汤 Pig’s Stomach and Clam Soup .. Again, Chef decided a typical pig’s stomach soup would not cut it and throws in a bountiful amount of clams in his! The result, is a spicy peppery soup with a sweet umami aftertaste! The pig stomach slices were soft and juicy while the clams were fresh and sweet. Definitely not the norm, pairing these two, but it didn’t fail us either! I can’t say it’s my favorite, merely because it was waaay too peppery for me but the rest of the company gulped down the soup with gusto! 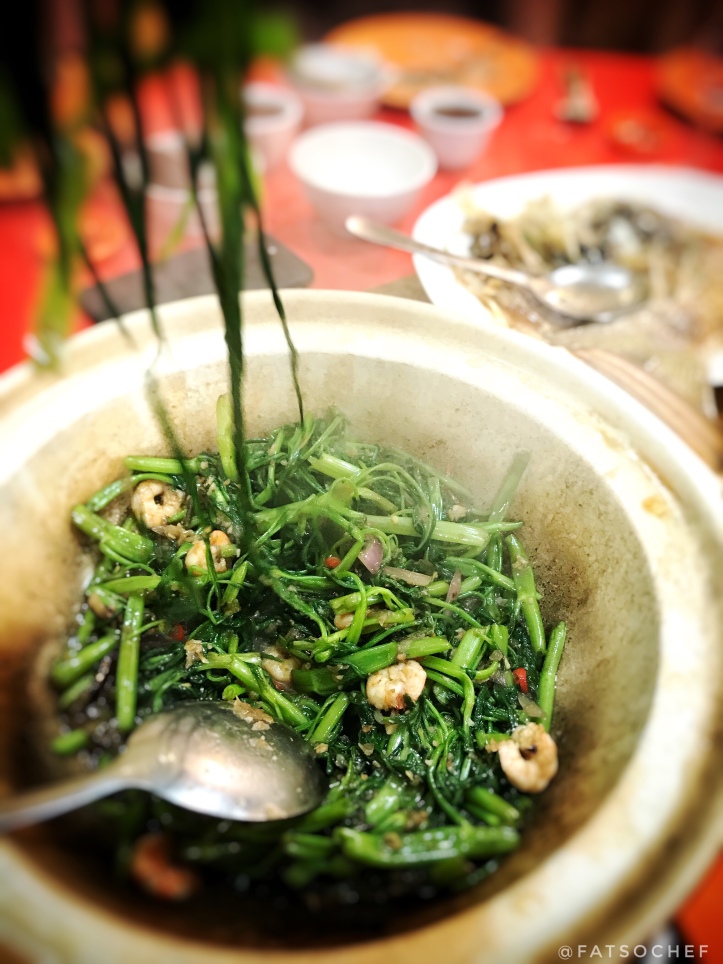 瓦煲翁菜 Claypot Water Spinach .. The mandatory vegetable dish sizzled in a fiery hot pot with shrimps, birds eye chili and garlic. As with all veggies, simple does it. The high heat of the fired up claypot gave the humble vegetables a flavor that was sharp and intense. 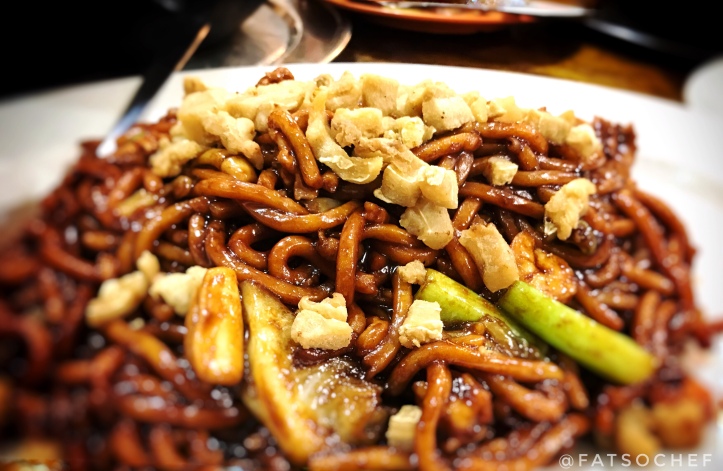 福建面 KL Fried Noodles .. Technically this is Tasteful’s rendition of the country’s legendary KL Hokkien Fried Noodles in Thick Black sauce. I must say it did not look promising when presented. Not black enough and even seemed a tad dry. What wasn’t lacking was the generous amount of crispy pork lard scattered over the noodles (yum!). This wasn’t on par to my favorite Chinatown restaurant‘s version but it was ok overall. Some of us started liking its subtle flavor after a couple of bites… perhaps something lighter was in order after the earlier dishes! 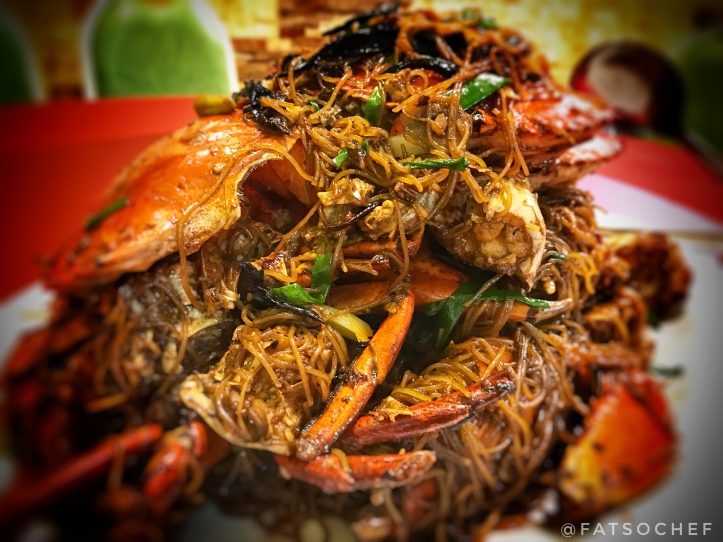 蟹炒米粉 Crab Rice Vermicelli .. when the final dish appeared, we were already well stuffed beyond our limits. But how do you turn away a dish that looked like this! Crab lovers at the tables rejoiced! And found room in their guts they never knew they had! I went straight for the vermicelli that’s been braised in a most intensifying rich seafood broth ever. If you are not one to get down and dirty digging at crabs, the vermicelli will satisfy you no less. In fact, it went faster than the crabs!

Tasteful Cuisine has certainly rose to the top of my go-to restaurants in KL. And if you are a sucker for rich and extraordinary flavors, this is one stop you gotta make! 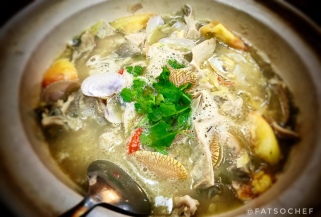 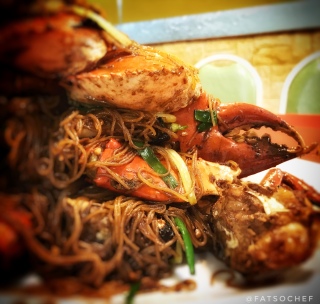 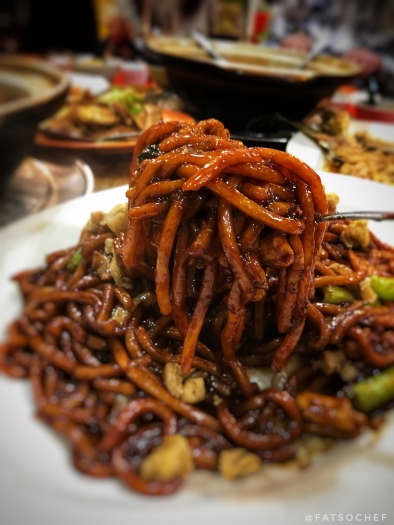 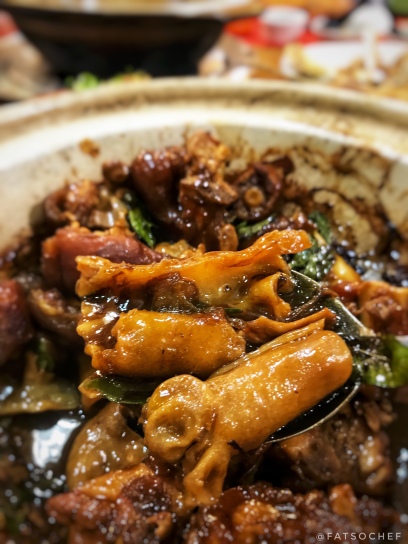 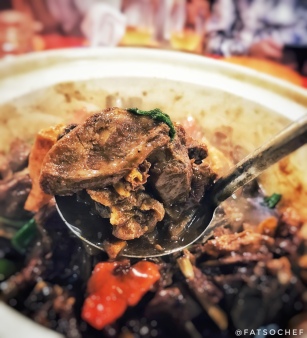 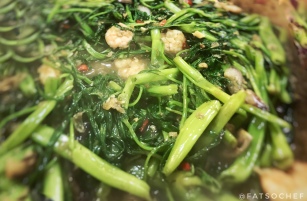 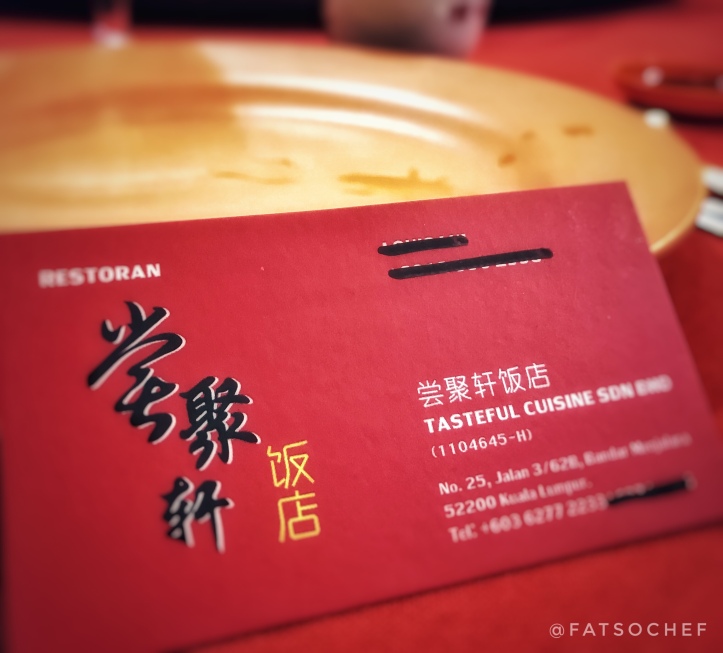