Since I am not prepared to eat a myriad amount of Char Kway Teow* to deduce the top 5, I decided to follow the lead of a local celebrity blogger (who likes to eat, shoot and post), whom I presume had eaten his fair share and come up with his top 5 (Thanks Doc!). But first, what makes a hawker popular? Do you decide on your meal based on the stall that has the longest queue? Is that the wisest? Are you always impressed or sometimes disappointed? Queues happen in 2 scenarios. One- the chef has great culinary skills. Two- the chef cooks real slow! I knew, prior to going on this top 5 CKT trail, there will be a lot of waiting in line which frankly, isn’t my favorite pass time🙁. But I guess that’s the price you have to pay to savor the best… or is it? My quest began at Zion Road Hawker Centre. One of the most famous in Singapore for many years. 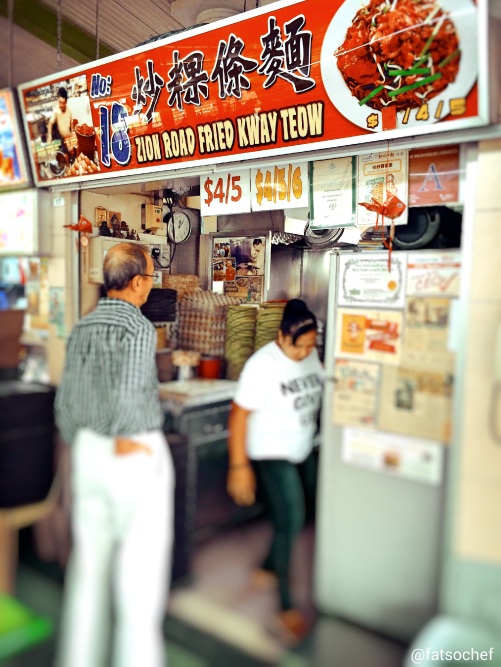 is known to long queues during lunch. So I decided to start early at 11am, certain I would beat the crowd,  but alas, Uncle* wasn’t even there😧! A friendly Filipino lady who was setting up told me they will only start cooking in 30 minutes. I coyly placed an advanced order which she sweetly took. “Come back and collect later!”, she said.

A half hour later, we got our plates of piping hot CKT! It looked delicious.. There’re chunks of crispy pork lard in every mouthful of soft slippery moist noodles! There was a reasonable amount of ingredients and significantly, cockles that were fresh, plump and juicy. It did lack wok hei* and for me, a little too subtle on flavor, but overall, still a pretty good CKT and I can understand his long standing fame and queues! If you like crispy pork lard and big fat cockles, this is the plate for you! By the time I wiped down my plate, the line had built up to a good 10 people and growing! The mad lunch hour had begun! 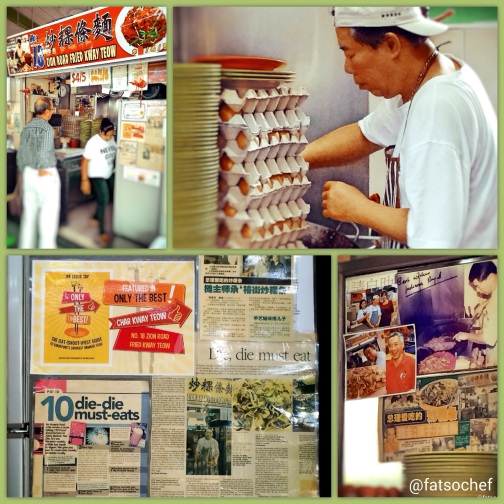 Contrary to the name, this is not on Hill Street. It was, decades ago, but not anymore. Instead, it is now located at a spacious, airy hawker centre in Bedok South Road. There were just 2 customers in the queue when we arrived at 1.40pm but it started forming behind us in a blink of an eye. Since we were 3rd in line, we got our grub pretty quick. I was surprised to see a lady helming the wok. Barring the many photos plastered on the walls, “Uncle”, the original owner/chef was nowhere in sight. My confidence level dipped but we ordered anyway. 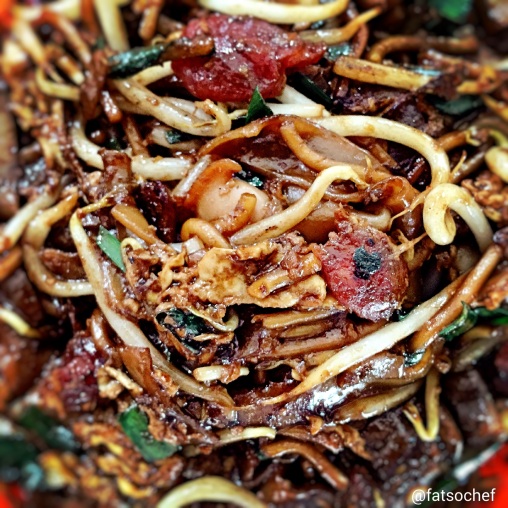 There was visibly less lard crisps on this one, and the cockles were rather small…. but yowza! The flavor was AWWWESOME👍🏻👍🏻!!! The noodles were cooked perfectly… Perfectl balance of sweet and savory! Perfectly smooth, slippery and smackingly moist! And yes! Wok hei is In Da House 🔥🔥🔥! Ingredients were aplenty. It was a super duper CKT and just the way I like it! I turned to give “Auntie” the thumbs up 👍🏻 which she bashfully responded with a big smile and thank you! Sorry Zion, you’ve just been hammered🔨!

Despite the snaking long queue, and us at number 15, we waited merely 25 minutes for our CKT, which ironically is reasonably short. Many hawkers insist on ‘quality control’ by cooking individual portions but here at Outram CKT, Uncle fries them in large batches. And though some hawkers frown upon it, truth is, this one turned out pretty damn yummy! Wok hei – check✔️ Flavor – check✔️ Efficiency- double check✔️✔️ The only downside to batch cooking, ingredients get distributed in random as well. I had one teeny piece of fish cake in my entire plate while another had more! Having said that, this version isn’t exactly filled with ingredients… except for eggs. 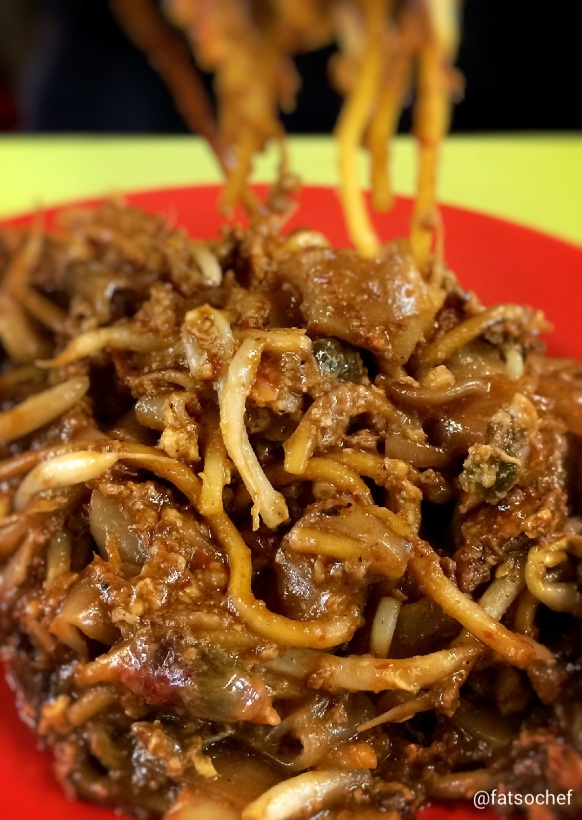 The noodles are smothered in soft fluffy egg, a signature of Uncle’s! He’s generous with the bean sprouts too but that’s about it. This CKT has got good wok hei and moisture. It is subtle on sweet black sauce but seasoning and aroma is spot-on thanks to the abundance of garlic and lard. The queue here hardly eases but with pre-ordering taken whilst you’re in line, you pretty much get handed your noodles minutes within reaching the front of the line.

doesn’t start selling til 5pm daily. Uncle is a one man show from taking orders to cooking to plating, packing and collecting payments. He cooks by the plate and takes his time at it too! But everytime he looks up from his wok, you’re greeted by his warm smile and soft-spokenness. Hard to get mad at that face! There were only 7 people in the queue when we arrived and we waited a half hour for our noodles. 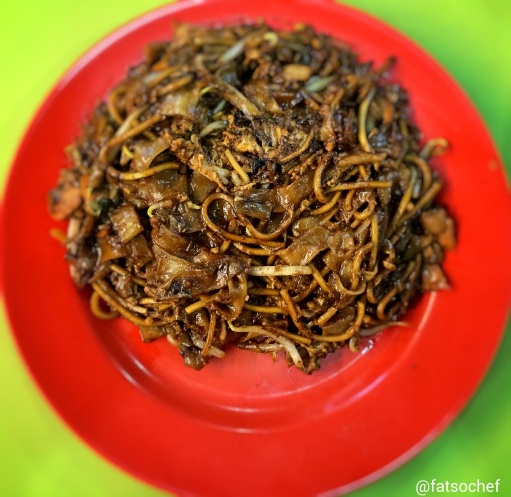 If you like cockles, Hai Kee’s CKT has lots. Apart from the many cockles, I did not understand its popularity as there was neither wok hei nor taste in this CKT and was verging on being a tad dry. Unless this was a healthy version, it needed more of everything, from sweetness to saltiness to moisture to oil to more ingredients please. Nevertheless, the dinner crowd still rolled in and patiently they waited while Uncle fries his kway teow calmly and unhurriedly…

14 people in the queue when I arrived at 10.40am! 5 mins later and I have not moved from my spot. This better be good! On closer inspection, most are queuing to takeaway and we’re talking at least 3 packs a customer! It’s 11.07 and I’m still 10 customers away😥. Finally after exactly one hour, we got to eat! Though frustrated and agitated from the heat and long wait, I put aside all grudges and tucked excitedly into my smoking hot CKT.

Even in my $3 plate of CKT, there were lots of ingredients. Thick slices fish cakes, Chinese sausages, bean sprouts, cockles and huge chunks of eggs. Just look at the picture! Its aesthetically gorgeous! Unfortunately and shockingly, it was really bland. Did he forget something? Salt, maybe?! How could this be? I really wanted to like this one, given the time I’ve invested in it. I looked back and saw the queue grew to about 20 more people and shudder at the thought of waiting another hour for a tasteless CKT😣

No. 1- Hill Street gets the crown as my top favorite!

*wok hei- the smoking heat you can taste from speed cooking in a wok over super high open fire.