We are adventurous when it comes to food; and jumped at the chance to visit Ko Ang Seafood in Phuket Town the moment we found out about it! This is as local as one can get. We rode in early one weekday evening. There were a couple of small Thai families but not one foreigner in sight. The staff was friendly enough to make us feel at home despite the language barrier. As far as the food is concerned, they’ve got the usual Thai classics galore… however, we were there for the unusual suspects!

Yum Kai Mangda Talay or Horseshoe Crab Roe is a popular dish among the locals. Contrary to its name, horseshoe crab ain’t no crab! Instead, it is closer related to spiders and scorpions! Neither does it have fat, juicy meat like a regular crab and its roe isn’t quite the same either. So don’t be expecting it to taste anything like crab!! Horseshoe crab roe is much more pungent, which probably explains the equally spicy, sour salad it comes with. The salad, a mixture of green mango, shallots, chilis and garlic among a host of other spices and herbs does a good job neutralizing the chalky roe. It is definitely an acquired taste, not something you’d like instantly but I wasn’t turned off either. One horseshoe is probably too much for two people. Yes its big! And a little goes a long way, so it’s not something you could eat a lot of.

Gaeng Som Phuket Style or Hot and Sour Fish Fillet isn’t as straight forward as it sounds.  It is significantly sour and warmly spicy. If my tolerance for chili was higher, I would have enjoyed it very much. I’d drown my rice in the tangy soup and chomp on the fresh firm fish chunks and it would be a happy meal on its own.

Fried Red Ants was a mountain of ants and lavae! Yep, lavae! Protein upload, that’s what this is! Don’t be intimidated by what it is or how it looks. If you’re wondering, it’s neither slimy, mushy nor gross; It has a light crunch with a mild garlicky flavor. Tip: Easier on the palate if eaten with rice.

Stir Fried Spicy Clams- These plump shellfish couldn’t be any fresher! Head up to the front of the restaurant where all the day’s catch is laid out and just point! We had these cooked in classic Thai style, in a lethal chili paste with basil. My lips were numb from this! 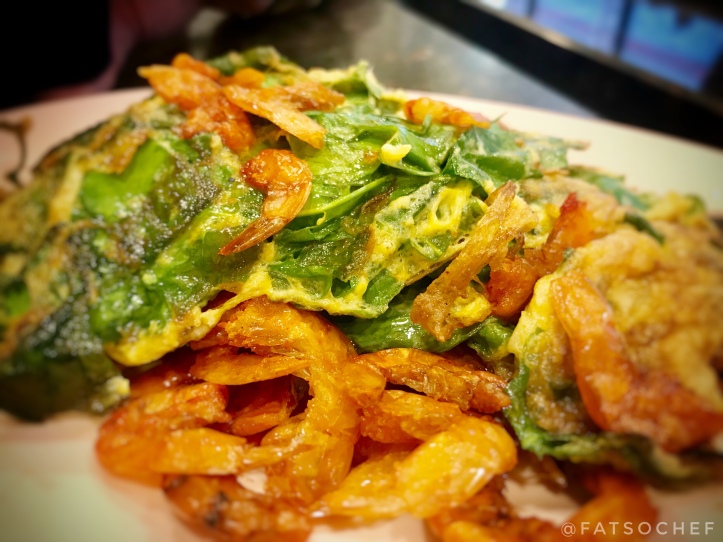 Pak Miang pad Khai… for the umpteenth time, my favorite vegetable turned up at the table! But with a twist! Together with the mandatory crispy fried shrimps, eggs were thrown in with the leafy veg, enveloping them like a thin omelette. Good things happen when you’re lost in translation!

Judging by the full house the time we left, I am certain Ko Ang is worth a second visit. I know, I know, this feels like a day on the set of Fear Factor but trust me, its just us being us on a first date!! We’ll be back to try some regular stuff cuz good things have been said about those too. Can’t wait!

How does your house smell right now?
Wait.. what’s the hype again?
🐾Chicken Feet in Black Bean Sauce 🐾 … finger licking good!
When you order something to share and NOBODY wants it 😅!! Well… Maybe Cauliflower doesn’t like you too 😛! #fatsochefwashere#fatsochef#friedcauliflower#cauliflower#thebritishclubsg#windsor#dinner#foodshare#theloserfam#igfood#dailyfoodfeed#loveitorhateit#igtherapy
🍰Let’s see where this goes…. #fatsochefcooks#fatsochef#baking#cake#cheese#burntbasquecheesecake#bakingtherapy#theloserfam#bakes#igtherapy#foodshare#igbakers#cheesecake#momsfavorite#eiskellerprivatekitchen
🤨 It’s like cheese could do no wrong!?